Home » What To Do In Costa Rica » National Parks, Hiking, and Walking » Why You Should (And Shouldn’t) Visit The Arenal Volcano National Park 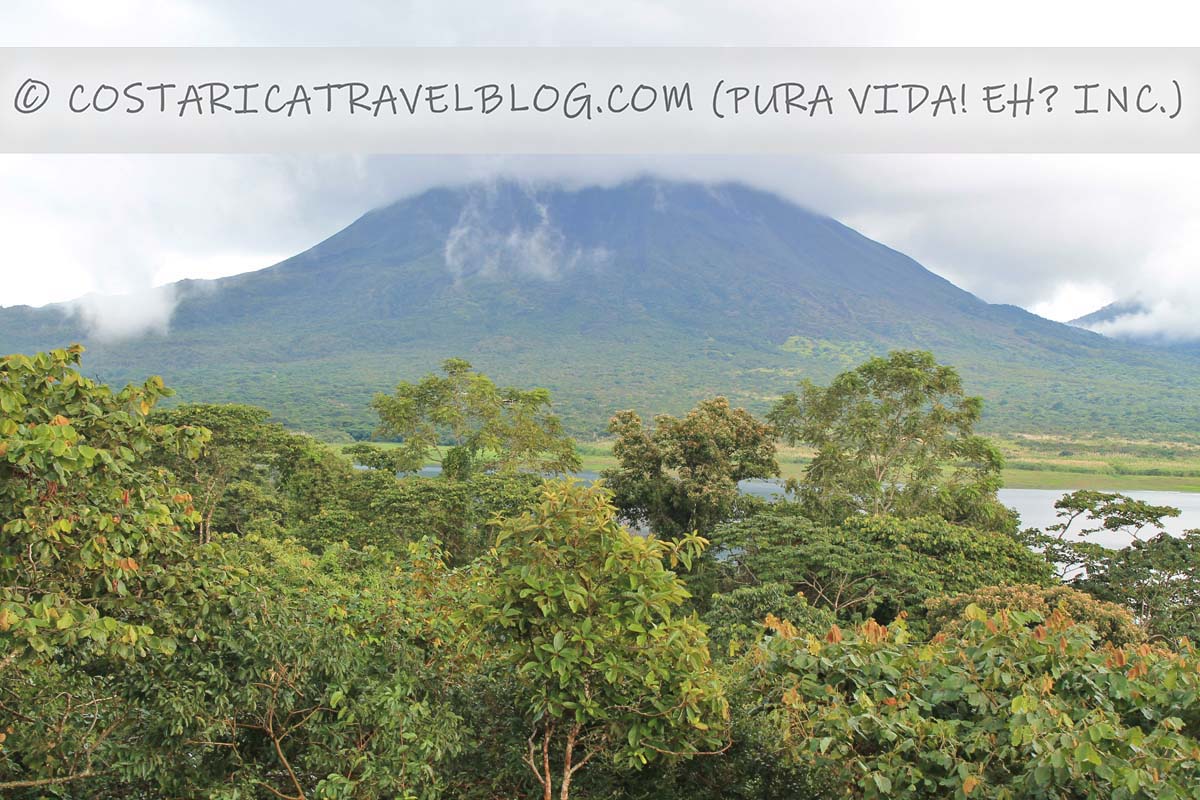 Know this first before visiting the Arenal Volcano National Park

You won’t get to scale the Arenal Volcano, peer into a crater, or witness lava flow while you visit Costa Rica’s Arenal Volcano National Park.

To explain why we opened this article with the aforementioned blunt and arguably negative statement we’ll need to rewind a few years.

La Fortuna and the Arenal Volcano circa 2010

As we mention in our related blog post Must-Know Info About La Fortuna From Longtime Residents, La Fortuna is our favorite Costa Rica destination. We’re biased, of course, because we’ve lived in La Fortuna (off and on) since 2007. Back when we first moved to the town, the activity of the Arenal Volcano and tourism in the region was very different. The volcano was La Fortuna’s main attraction; it erupted on the regular and drew in hundreds of camera-ready travelers daily, each hoping to see big, grey billows of smoke rising up from the crater during daytime pyroclastic flow and fantastic displays of fireball-red lava rocks tumbling down the volcano’s slopes at night.

From the front porch of our residence in a small community on the foothills of the volcano, we witnessed these sights on the regular but never tired of their thrill. I’ve lost count of how many nights I was awakened by the sound of a grumbling volcano and ran to the front window of our home to make sure lava rocks weren’t headed in our direction. I wondered if the thousands of tourists holed up in La Fortuna-area hotel rooms with a volcano view were doing the same. The volcano’s eruptions, though unpredictable, were consistent enough to delight most visitors. La Fortuna became known as the place to go in Costa Rica if you dreamed of seeing an active volcano. Unless you happened to visit on a cloudy day, the majestic Arenal Volcano was that dream come true.

Fast-forward to today and you’ll find that the town of La Fortuna is more popular than it ever was, no thanks to volcanic eruptions. Residents like Ricky and I bid adieu to those spectacles after the Arenal Volcano suddenly stopped erupting in 2010. If you were lucky enough to see the volcano while it was noticeably active, you witnessed a piece of history. Volcanologists don’t anticipate it will erupt again for several more years, possibly generations. Today, only a small amount of smoke can be seen escaping from the volcano’s crater, if any. This means you’ll need to find a different reason to warrant spending time and money in La Fortuna, especially if you plan to visit the Arenal Volcano National Park.

Why we like visiting the Arenal Volcano National Park

A note about the Arenal Volcano National Park entrance fee

Both sectors of the Arenal Volcano National Park charge the same entrance fee which is valid for one full day (for entrance fee information, don’t miss our related blog post A List Of 50+ Costa Rica Entrance Fees: How Much It Costs To Enter National Parks, Reserves, And Refuges). If you decide to explore both sectors, plan to do so during the same day to avoid paying the entrance fee twice. Simply pay the entrance fee at the first sector you visit, save your entrance ticket, then show the ticket upon arrival at the second sector to gain complimentary access.

The Arenal Volcano National Park‘s Main Sector has 3 trail systems (senderos) that can be explored on foot: the Coladas trail, the Ceiba trail, and the Heliconias trail. The Arenal Volcano National Park also has a roadway trail (dubbed the “vehicle trail”) that permits travel though a section of the park by car. The roadway trail leads to one of the park’s 2 volcano viewpoints that’s known as the Mirador Principal. The other volcano viewpoint (unnamed) is accessed via the Coladas trail.

The Coladas trail is the Main Sector’s most popular hiking trail. It’s a flat, linear, forest trail that’s easy to walk. Branching off from this trail is a set of steps that lead a short but steep uphill climb to a volcano viewpoint. If you choose to make the climb, you’ll find yourself standing atop a mound of lava rocks referred to as Colada Lava 1992 (continue reading below for details). If you’d rather not ascend and descend the steps, you can either turn back and retrace your steps to the start of the Coladas trail, or else take the Ceiba trail which branches off the Coladas trail to the south.

The flat, looped, and usually unoccupied Heliconias trail, which is accessed just beyond the entrance to the park, is the Arenal Volcano National Park‘s shortest trail. It can be fully explored in less than 30 minutes. Note that the Heliconia trail does not connect with the Coladas trail and/or the Ceiba trail. It also does not provide access to a volcano viewpoint or lava rocks. Hike this quick and easy trail only if your time and/or mobility is limited. Otherwise, stick to the Coladas and Ceiba trails.

Arguably the best feature you’ll find inside the Arenal Volcano National Park‘s Main Sector is the field of lava rocks that you’re welcome to climb around. This field is called Coladas Lava 1992. It’s comprised of thousands of volcanic rocks that once spewed out of the Arenal Volcano and currently form mounds around the volcano’s foothills. Standing atop the mounds not only provides an opportunity to see the grey, ashy side of the Arenal Volcano up close, but to also see a calm Lake Arenal at a distance.

A cautionary note: Please pay attention to the warning signs around the lava rocks and watch your footing while you climb. The rocks are large, sharp, and slippery when wet. It isn’t difficult to twist an ankle or slip and scrape your leg while hiking around this part of the park.

The Arenal Volcano National Park‘s Peninsula Sector has 2 trail systems (senderos), the Miradores trail and the Tororoi trail, that can be explored on foot. There are no vehicular trails.

The Miradores trail is the Peninsula Sector’s main hiking trail. It’s a flat, concrete, linear trail that cuts through forest on a peninsula comprised of parkland. From the sector’s entrance to the peninsula’s tip (where the Miradores trail ends), the trail follows a downward slope which is steep in places. Along the way you’ll hear plenty of bird songs as the Peninsula Sector is the best area of the Arenal Volcano National Park for bird-watching. You’ll also pass 2 clearings in the forest that expose a distant Lake Arenal. Shortly before reaching the peninsula’s tip you’ll encounter an observation tower (continue reading below for details). Once you reach the peninsula’s tip and spend a few moments taking in the view (continue reading below for details), you’ll turn back and retrace your steps to the start of the Miradores trail just beyond the Peninsula Sector’s entrance.

If you’re not scared of heights or sets of steep staircases, you may wish to climb to the top of the 12-meter observation tower that overlooks part of the Arenal Volcano National Park. Though there isn’t anything to do at the top of the tower other than take in a beautiful view, it’s worth the ascent/descent if you want to see the Arenal Volcano and part of Lake Arenal at a distance.

The furthest you can hike inside the Peninsula Sector is to the peninsula’s tip, which juts out into Lake Arenal. At the tip, you can get close enough to the water to touch but doing so isn’t recommended as there may be crocodiles in the area. Swimming is prohibited. A lovely, lakeside, raised platform built around a tree provides a safe place to take in a beautiful panoramic view.

There’s plenty of wildlife to see inside the Arenal Volcano National Park, but like wildlife-viewing elsewhere in Costa Rica, spotting several species requires some luck. The fact that the Arenal Volcano National Park is a popular attraction in the La Fortuna region means that visitor flow is constant. To increase your chances of seeing wildlife in this park, walk slowly and quietly (talk quietly too, if you must converse) and scan the forest floor and treetops regularly. Some of the wildlife that we’ve seen during our visits include coatis, peccaries, monkeys, sloths, snakes, frogs, spiders, ants, and many, many types of birds.

Which sector is better? The Main Sector or the Peninsula Sector

As noted above, if you plan to explore both sectors of the Arenal Volcano National Park over the course of one calendar day, you’ll only pay the park entrance fee once. But if your time (or interest) is limited and you need to choose one sector over the other, here are some defining points that may help you decide whether it’s best to visit the Main Sector or the Peninsula Sector.

QUESTION TO COMMENT ON: Have you been to the Arenal Volcano National Park? If so, which sector(s) did you visit and why?

We’re Ricky, a born-and-raised Tico (Costa Rican) and former tour guide; and Nikki, a writer, published guidebook author, and Costa Rican Tica at heart. We’re a happily married, nature-loving, adventurous couple in our 15th year of exploring Costa Rica together. In addition to writing this Costa Rica Travel Blog, we’re the team behind several other Costa Rica-based projects, including:

Is the value of your Costa Rica trip worth $5? If so, get DIY Costa Rica access.

Itemized by category, the following is a breakdown of the recommendations documented on DIY Costa Rica. Register today (it’s $5 for a full year of access) to start browsing!

Our blog is ad-free and affiliate-link free!

Your SPAM-FREE visit to OUR FREE WEBSITE is more important to us than making money off your clicks. We appreciate your interest, preference, time, and visit. Pura vida! 🙂