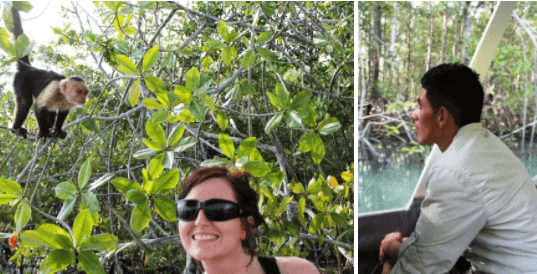 This is a tiger crab. Thanks to him, Ricky and I (along with thousands of other travellers each year) are able to participate in the mangrove tour Costa Rica–a fun and informative boat tour (or kayak tour) experience run just north of the town of Quepos (Manuel Antonio) on the country’s Central Pacific coast. The creature may be tiny, but its importance is great given that a large percentage of the mangroves’ rate of survival is dependent on the quality of the crab’s work.

How do I know this? Because Pablo told me.

Why is this significant? Because Pablo knows everything there is to know about the mangroves.

TOURING THE COSTA RICA MANGROVES WITH A GUIDE: WHAT TO KNOW AND WHO TO TRUST

Thankfully, we chose Aguila Tours / Manuel Antonio Expeditions to participate in the mangrove tour Costa Rica with (you can read about another experience we had with Aguila Tours / Manuel Antonio Expeditions in our related blog post Manuel Antonio National Park: Sloths, Snakes, Sunshine, And So Much More). Other companies offering Costa Rica mangrove tours may bring travellers to the same site for a float through similar canals, but I have no doubt that our mangrove boat tour experience with the company we chose was unlike any other. I cannot imagine other tour guides being more knowledgeable and passionate about their work than Pablo, and if there is anything I look for more in a tour guide than his or her infusion of textbook and field knowledge, it is his or her love of sharing knowledge with others.

Surely, anyone can teach themselves about the mangroves, just as any guide can educate a group of travellers on the same. However, when you find someone who has the X-factor–an ability to excite you about something that you may not otherwise think twice about on any other day, in any other situation, in any other area in the world–you know you’re in good hands. It was clear from the moment we first met Pablo that he was a knowledgeable and talented naturalist guide, however even more noticeable was his love for the job that shined through his rapport with travellers. Only a few minutes into the start of our boat tour (when Pablo had already spotted a handful of things for us to snap photos of) a traveller asked Pablo, “how did you see that” referring to something hidden in and among the mangroves’ intertwined root system. Pablo responded with a hint of sarcasm and a smirk, saying: “Isn’t it obvious, man?”. We all had a laugh and I realized that not only were we in the hands of someone who was going to show us more than we ever thought we would see during the tour, but that we were going to have fun throughout the entire experience.

WHY TOUR COSTA RICA’S MANGROVES? WHAT IS THERE TO LEARN?

Without giving away too many details and spoiling the educative component of the mangrove tour Costa Rica for all of you who wish to make the trip for yourselves, below is a taste of some of the topics Pablo touched on while touring us around.

WHO SHOULD VISIT THE MANGROVES COSTA RICA?

Although Costa Rica’s mangroves offer a little something for everyone, the following types of travellers (more so than others) will likely agree that a mangrove tour in Costa Rica is worth the time and expense.

Travellers in search of a relaxing, wildlife-driven, educationally stimulating tour

The mangrove tour experience is far more about what you’ll learn than what you’ll do. As a typical boat tour, you won’t do much, but you will be given a lot of information (including answers to some of the questions we list above). If you’re not looking to be active, but you are looking for an activity that you can walk away from feeling as if you’re a more informed and knowledgeable traveller, the mangrove tour Costa Rica would be a good choice.

Senior travellers, young children, and/or travellers with some physical/mobility impairments

Given that the mangrove boat tour experience does not require much of travellers in the way of strength or movement (with the exception of being able to climb into and out of the boat and the tour operator’s transportation vehicle, this tour is a suitable option for most travellers, especially those who would prefer information-rich–yet primarily inactive–tours.

For more adventurous travellers looking to trade in the somewhat sedentary mangrove boat tour experience for a more physically demanding activity, the mangroves can also be toured via kayak (single and double-seat kayaks are available). Depending on the amount of kayaking experience and the degree of endurance that a traveller brings to the tour, guides can alter the mangrove canal route to best accommodate the participant’s skill and ability level.

The mangroves are one of the best places in Costa Rica for birdwatching among the more publicized tourist sites. Up there on our list with the Cano Negro Wildlife Refuge (Rio Frio) and the Palo Verde National Park (Rio Tempisque), the Manuel Antonio mangroves gave us the opportunity to spot rare bird species that we have not been fortunate enough to see elsewhere. Can’t tell a flycatcher from a tanager? No problem! The mangroves in Costa Rica are home to iguanas, monkeys, snakes, caimans, crocodiles, lizards, crabs, snails, and more interesting creatures–enough to please both birders and non-birders alike.

A SPECIAL TREAT INCLUDED WITH THE MANGROVE TOUR MANUEL ANTONIO

One of the most unique tour experiences we have ever had took place after we finished touring the mangroves. As a special treat, Manuel Antonio Expeditions invites travellers back to Pablo’s house (located within a small community situated just outside of Quepos) for lunch or dinner, depending on whether the tour is run in the morning or the afternoon. During the visit we had an opportunity to meet Pablo’s family, including his precious daughter Nayla (who, during the day that we visited, was as proud as could be to show-off her new dress to the group of foreign visitors that had invaded her house). After a meal comprised of fish, rice, beans, salad, avocado, and Tamarindo juice, we said goodbye to Nayla and her pretty dress. Five minutes later we were back in Quepos, approximately four hours after we had embarked on the mangrove tour journey earlier in the day.

QUESTION TO COMMENT ON: Have you participated in the mangrove tour Costa Rica before? If so, what did you think?

If you’re more of a visual learner, take a moment to view our gallery photos below from our most recent visit to the mangroves.