Home » What To Do In Costa Rica » Canyoneering, Canyoning, and Rappelling » Costa Rica Canyoning Tour: Adrenaline And Assurance Found At The Lost Canyon 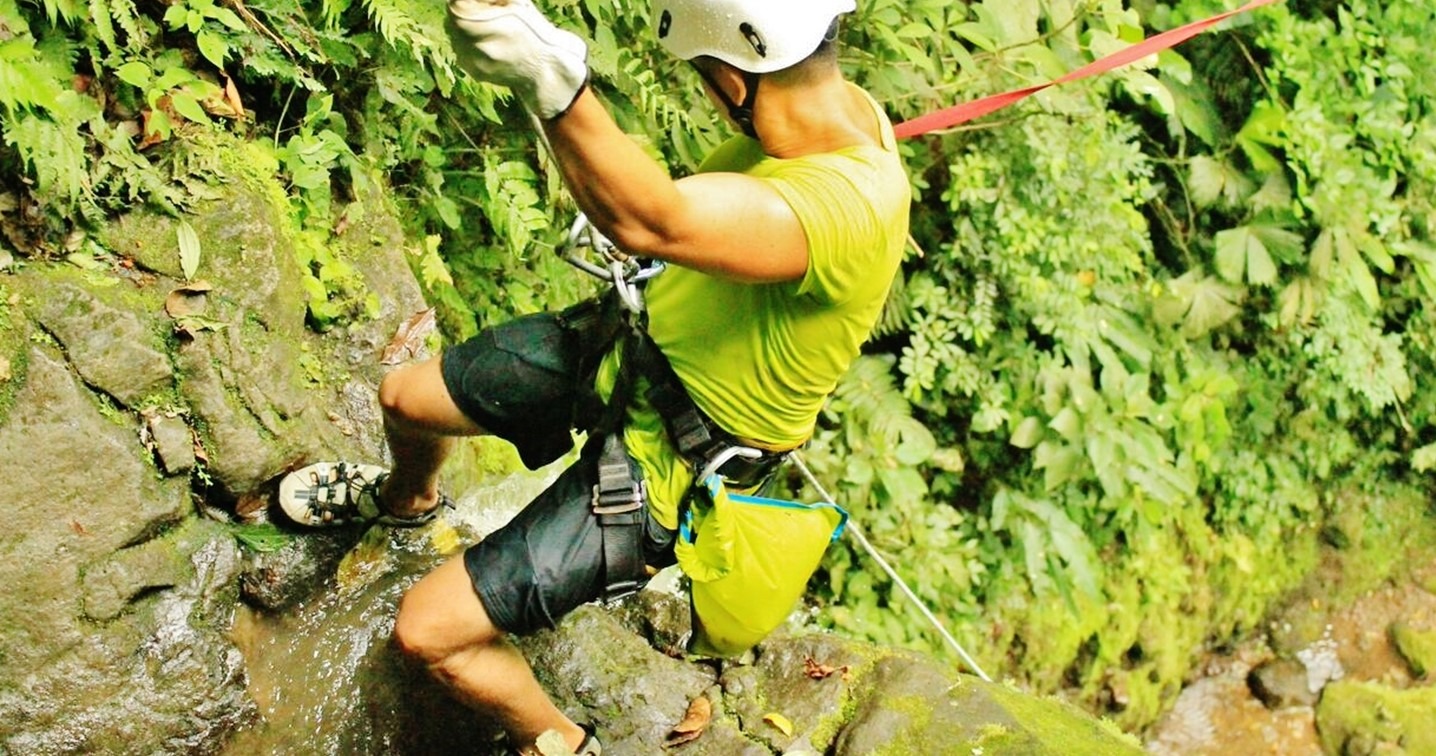 A LONGING FOR THE LOST CANYON (COSTA RICA CANYONING TOUR)

We are no strangers to excitement. In fact, if anyone dared to suggest that we chose the line of work we did in part for the adrenaline—not in spite of it—they would be right. You can imagine, then, how much we have been chomping at the bit for a while now to trade in our computer screens for a rappel run through Costa Rica’s Lost Canyon—a slice of the country’s natural wonderland that puts screensaver rainforest scenes to shame. For this activity we wanted the best experience possible, so we chose a company that is not only known for its one-of-a-kind Costa Rica canyoning tour, but also for being a standard-boosting model of safety, customer service, and client satisfaction that other industry operators look up to: Desafio Adventure Company (Desafio).

On a more personal note, we called our friends at Desafio and told them that our tired eyes and rusty bones could use an awakening. In response, they invited us to join them on an adventure of a lifetime.

For most travellers, Desafio’s Costa Rica canyoning tour experience begins with a pick-up at their La Fortuna hotel. If you have access to your own vehicle (as we have), you can opt to drive yourselves to and from your accommodation and Desafio’s office in downtown La Fortuna. Free parking (and street parking) is available out front and nearby.

Thirty minutes into the trip (and a fun 4X4-truck ride later, which treated us to a spectacular bird’s eye view of our San Carlos surroundings), we arrived at the Canyon Café. Guides fit us with harnesses, helmets, and gloves after we secured our belongings in the onsite lockers (which are available for tour participants to use free of charge). Another fifteen-minute jaunt in the 4X4 and we arrived at the tour put-in. Onel, one of our friendly tour guides, showed us the ropes—literally and figuratively. He taught us what to do, he showed us what not to do, and most importantly, he put our minds at ease when he confirmed that the most dangerous part of the activity is not the canyoning challenge itself, rather something participants have complete control over throughout the duration of the tour: walking on slippery river rocks from one rappel to the next.

“There is a discrete and invaluable calm that tour guides bring to the travel and tourism table; a feeling that is hard for travellers (even those as familiar with the country as us) to cook up on their own”.
~ Nikki & Ricky,
Costa Rica Travel Blog

It was comforting to know that Desafio’s guides had confidence in themselves and the process of their work. Truth be told, recognizing this quality in them taught us a fundamental lesson about Costa Rica “guided tour” experiences in general: that there is a discrete and invaluable calm that tour guides bring to the travel and tourism table; a feeling that is hard for travellers (even those as familiar with the country as us) to cook up on their own. Beyond the advantages of touring a site or an attraction with a guide that we described in our related blog post Guided Tours In Costa Rica: Are They Necessary, Valuable, And/Or Worthwhile?, a less noticeable consideration is the aura of reassurance that tour guides emit by simply being there. Perhaps it was the sense of empowerment we felt when we tried canyoneering for the first time with personal cheerleaders—Onel, Luis, Josue, and Victor—at our sides, or the feeling of companionship we experienced throughout and the relief that we were never alone, but we felt secure and self-assured from the start to the end of the trip. Having toured nearly every inch of Costa Rica, miles of which we navigated without a tour guide, the Lost Canyon exemplified how important yet understated tourist/guide camaraderie can be. For this reason and others, we found everyone connected to the Desafio Adventure Company organization (including Cesar who greeted us at the reception, Don Jorge who drove us to the Canyon Café, Kathe who provided the tour explanation, and everyone else from the meal cook to the reservations staff who offered us smiles and hugs along the way) to be truly great adventure “company”.

Before long we got the hang of it, the canyoneering dance; sometimes we walked, sometimes we jumped, and sometimes—during the most terrifying and thrilling of times—we held on to the ever-important “red line” with both hands and let ourselves soar between the narrow canyon’s walls, high above the river below, like an osprey stalking its prey.

“Amid a ten-second surge equal in spontaneity and controlled chaos, we let go of everything we brought to the Lost Canyon, not short of our anticipations, inhibitions, and hesitations.”
~ Nikki & Ricky,
Costa Rica Travel Blog

To date, some of our most exciting travel moments have included white water rafting swollen class IV/V rapids, bungee jumping into treetops in the cloud forest, ziplining through a fog of unfamiliarity into a great white unknown, and watching lava rocks tumble and flow down a volcano toward us as we sat on our front porch. Unforgettable memories aside, none of these rare, suspenseful, and often times eerie experiences made our hearts race with such a spike in adrenaline as the one we experienced when we arrived at the peak of Desafio’s fourth and final descent. At the top, one is both impressed by the stunning rainforest view in front and intimidated by the depth of the canyon drop below. Leaning over the rappel’s tower to see a waterfall cascade, turning around to step off its ledge backwards, and lowering ourselves down the escarpment were unnerving challenges in their own right, but each was only a sample of the excitement to come. Then, when the tour guides gave us the signal to do so, we threw caution (and our bodies) to the wind in a zipline-reminiscent free-fall into the gorge, and we experienced the most intense bout of acute exhilaration that we have ever felt. Amid a ten-second surge equal in spontaneity and controlled chaos, we let go of everything we brought to the Lost Canyon, not short of our anticipations, inhibitions, and hesitations.

A hefty fifteen-minute tiring uphill hike at the end of Desafio’s Costa Rica canyoning tour led us back to the Canyon Café where we were greeted by a snarky (yet fitting) sign that read “you made it!”. Fortunately, our reward for the accomplishment (in addition to surviving four downward rappel climbs, a small pool jump, a raging river rush, and countless careful treks over the aforementioned slippery river rocks) was a buffet lunch of chicken (optional, for vegetarian or vegan travellers), rice, beans, green salad, mixed heart of palm salad, fried yuca, fruit, and fresh juice (mora, day of our tour). Ronny, our tour group’s photographer, displayed his snaps and videos on television screens for all to see. As per Desafio’s daily tour operation (which includes a Desafio-employed paparazzi), travellers who wish to purchase copies of their tour’s photos and videos can do so onsite at the café (the photo and video cost is dependent on the size of the tour group and the number of people interested in the purchase).

“Sometimes the smallest details can make a world of difference, especially within the Costa Rica tourism market where competition is fierce. Here, ingenuity is gold, and Desafio is mining it in the Lost Canyon.”
~ Nikki & Ricky,
Costa Rica Travel Blog

In a smart and modern twist, instead of providing travellers with photo CDs containing image and video files (which can easily break or get lost during travel), Desafio issues buyers access to electronic copies of the documents online via the use of a personal email address. Didn’t we say above that the tour operator is a standard-boosting model that other companies look up to? Sometimes the smallest details can make a world of difference, especially within the Costa Rica tourism market where competition is fierce. Here, ingenuity is gold, and Desafio is mining it in the Lost Canyon.

QUESTION TO COMMENT ON: Have you experienced Desafio’s Costa Rica canyoning tour? What did you think?

If you’re more of a visual learner, take a moment to view our gallery photos below from our most recent visit to the Lost Canyon.